"And even after death, fallen branches, trunks in decay and rotting logs offer asylum and nourishment to the most various, rich and precious living community". Franco Tassi (from The Man who planted trees by Jean Giono)
Composting is a real solution to waste management and keeps our garbage out of the landfill, while simultaneously providing endless amounts of precious nutrient rich substances, making for better soil, healthier plants and a richer ecosystem. Composting changes the way you see feel about your garbage!
We practice several kinds of composting at Costa Digiano including:

Worm Composting - We love worms!!!
“Nobody and nothing can be compared with earthworms in their positive influence on the whole living Nature. They create soil and everything that lives in it. They are the most numerous animals on Earth and the main creatures converting all organic matter into soil humus providing soil’s fertility and biosphere’s functions: disinfecting, neutralizing, protective and productive.” - Anatoly M. Igonin21, Ph. D., Professor at the Vladimir Pedagogical University, Vladimir, Russia, as quoted in Casting Call 9(2), Aug 2004. 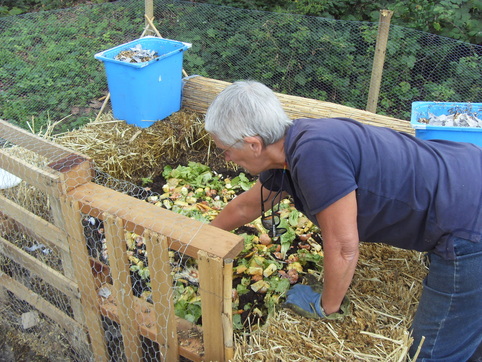 Mom feeding our first worm bed in September 2012
If bees are the queens of the air, then worms are the kings of the soil. Worms turn trash into treasure. Their purpose in nature is to transform any kind of organic waste into a rich humic substance, which is readily available to plants in an optimal form. Potentially it is the ultimate plant fertilizer.
Aristotle called worms the “intestines of the earth” and Charles Darwin wrote a book on worms and their activities, in which he stated that there may not be any other creature that has played so important a role in the history of life on earth.
Earthworms have an extremely important role to play in counteracting the loss of biodiversity. Worms increase the numbers and types of microbes in the soil and this below-ground biodiversity is the basis for increased biodiversity above ground.
And almost miraculously worms also have the capacity to devour and neutralize pathogens. Extensive studies have shown that even if raised in pathogen rich surroundings something inside the worm destroys the pathogens, leaving the castings pathogen-free.

What is worm composting?
There are an estimated 1800 species of earthworm worldwide, but the one most commonly used in worm composting is Eisenia fetida commonly known as the “compost worm”, “manure worm”, “redworm”, and “red wiggler”. Worm composting uses these worms to recycle food scraps, manure and other organic material into a precious soil amendment called vermicompost or worm humus.
What is vermicompost?
Vermicompost is a substance rich in nutrients essential to plant growth including Nitrogen, Potassium, Phosphorus, Calcium and Magnesium. It has higher levels of plant available nutrients than any other kind of compost. Vermicompost may also be as much as 1000 times as microbially active as compared to regular aerobic compost, thus enriching the soil not only with fertilizing nutrients but with life enhancing biodiversity. Vermicompost also has a high moisture holding capacity, rendering the soil more capable of maintaining moisture.
Why is it so special?
Vermicomposts have proven to consistently improve seed germination, enhance seedling growth and increase plant productivity. Studies have also shown that plants grown with vermicompost show greater resistance to disease and less problems with insect pests. Vermicompost is an incredibly nutrient rich humus, which improves soil structure, increases its biodiversity and renders it less prone to draught. And unlike chemical fertilizers, Vermicompost can't be easily washed out of the soil because it becomes part of the soil structure. becomes part of the soil, rendering it better and plants healthier.

Worms at Costa Digiano.
We started worm composting in September 2012 by inoculating our first bed with approximately 2000 compost worms. We feed our worms weekly with an array of fruit and vegetable food scraps from Mirco's restaurant along with horse manure provided by our horse Baran. Once a month we spray the biodynamic preparation Fladen on our worm bed.

Other kinds of composting at Costa Digiano

We also practice several other kinds of composting. The goal is to compost, recycle and transform 100% of our organic/biodegradable refuse here on site at the farm. This includes food scraps, horse manure, leaves, clipping from pruning and cleaning (from which we make a fantastic mulch that we use in our compost piles and on our veggie beds).
These various compost piles are divided into: 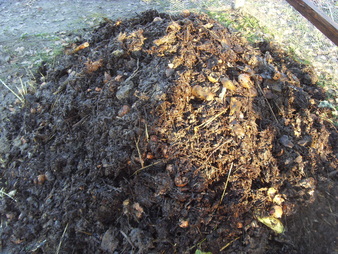 Includes any excess food scraps that don't go to the worms, and we add a little horse manure to help the pile heat up nicely. We build this pile until it's approximately 1m2 and then inoculate it with biodynamic compost preps and then allow it to age 4-6 months undisturbed. We also spray it regularly with Fladen. Fantastic in the veggie garden. 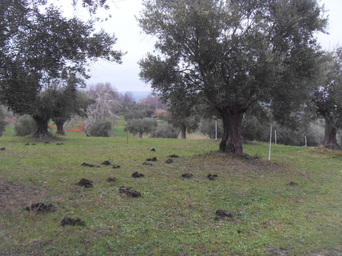 This is 100% horse manure from our horse Baran, who lives free in the pastures under our olive groves and eats almost exclusively from the fields including a rich array of grasses, chicories and many herbs (if necessary we supplement his diet only with organic hay). Once we've gathered enough of this wonderful manure we build our manure pile, we inoculate it with biodynamic compost preps and allow to age 4-6 months. Fantastic in the veggie garden and perfect for fertilizing our olive trees. 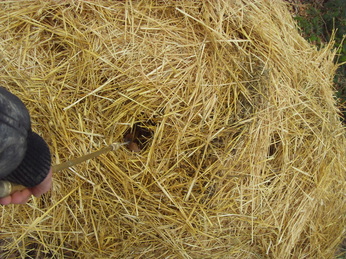 This is a compost pile we make once a year in January/February with the multitude of oak leaves that fall in our yurt garden. We layer the leaves with horse manure until we have a pile about 1m high and 2m long. We then cover it with straw and spray regularly with Fladen. It takes oak leaves a very long time to decompose, so we allow this pile to sit for a full year until we create the next one. The resulting soil is perfect for seeding and is a great local and environmentally friendly alternative to peat moss. 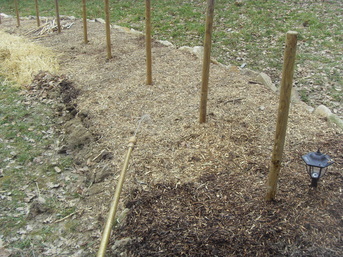 This is a technique we use to simultaneously sheet mulch areas and create fertile soil at the same time leaving us with weed free areas that are covered with rich, fertile planting soil. First we cut grass or aerate the soil with a pitch fork, then we lay down a layer of cardboard (of which we have an unlimited supply at Mirco's restaurant) covered with a layer of horse manure. We then top it off with a nice layer of our mulch (mulched clippings, branches etc.) and allow to age until ready. We spray regularly with Fladen.